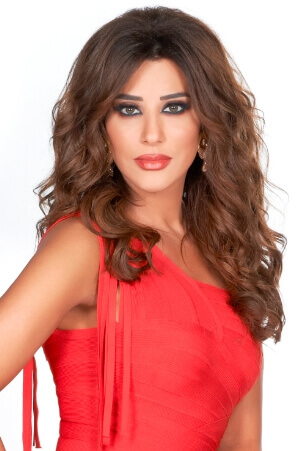 Najwa started her singing career after winning the golden medal in the singing contest (Layali libnan-Lebanese nights), after that she entered the Lebanese institute of music where she was  studied  music under the direction of radicals such as Zaki naseef and Fouad awad.

Najwa Karam is one of the most successful Arab singers—participating in numerous festivals and concerts around the globe, and has received a number of awards.

Najwa built her own musical track under the title of “shams al ughniye il-libneniye-sun of Lebanese song”.

She chose to perform Lebanese songs only over twenty years of ultimate stardom with an outcome of 19 albums, some of which are Ya Habayeb, Ma Bassmahlak, Hazi Helo, Ma Hada La Hada, Maghroumeh, Rouh Rouhi , Oyoun Qalbi, Nedmaneh, khallini Shoufak, Hallayli Mafi Nom,….

In addition to her career, is being a member of the jury in Arab’s Got Talent seasons 2011 and 2012.

More in this category: « Ahlam Haaya »
back to top