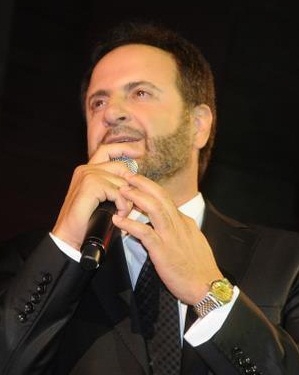 Ghassan Saliba is a Lebanese singer well known for his patriotic character, either on stage - through the musical plays - or through his songs, and for his strong and warm voice. Ghassan undoubtedly has one of the widest voices among the new generation singers not only in Lebanon but in the whole Arab world.

His first appearance was in "Studio El Fan" where he got the first prize in "The Lebanese Song" category.

In 1988, he starred in "Sayf 840", a musical play for Mansour Rahbani, where he played the role of "Seif El Bahr". Ghassan proved in that play to be the best to sing patriotic songs. Some of the patriotic songs of the play were "Lama3it Abwa' Essawra", "Zayyinou Essa7a", "Tawwalou Aleina", etc.

Also, the warmth of his voice was clear in "Gharibayn Wu Layl" which is one of the most famous Lebanese love songs ever.

In summary and till now, Ghassan Saliba has acted in 13 musical plays.

More in this category: « Ilham Al Madfai Brigitte Yaghi »
back to top